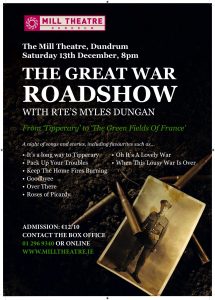 Next Show The Mill, Dundrum, December 13

In 2014, the centenary year of The Great War, Pegasus and RTE broadcaster and historian Dr. Myles Dungan have joined forces to tour Ireland with two commemorative projects

The final date of the year will be a special pre-Christmas performance in The Mill, Dundrum, on this Saturday, December 13, at 8pm.

Tickets are now on sale from the theatre.

The Great War Roadshow celebrates the unquenchable spirit, wry humour and irrepressible melodies of a lost generation, a hundred years after their elders sent them in their millions to fight an immoral war. Dr. Myles Dungan presents an evening of songs and music from The Great War, featuring The Brook Singers, with soloists Sadhbh Burt Fitzgerald, Jonathan Creasy and actor/tenor Brendan MacQuaile.

The show tells the story of each of the songs, how and why they came to be composed, who sang them, what the men in the trenches thought of them and how they retaliated with music which chimed with their own experience rather than the dictates of a music industry anxious to collaborate in boosting the war effort while making a lot of money in the process.

Included in the programme for the night are standards such as It s A Long Way To Tipperary , Pack Up Your Troubles , Keep The Home Fires Burning , Roses Of Picardy , as well as subversive and witty ripostes like The Recruiting Sergeant , Salonika , Hush Here Comes A Whizzbang and When This Lousy War Is Over .

More than two dozen venues are now confirmed to take the Day Programme of World War 1 talks, or our Evening Programme musical show.

Pegasus is delighted to offer county councils, libraries, heritage officers, theatres and arts centres across the country the opportunity to take part in this tour.

If you want the centenary roadshow to visit your town, contact Dani at info@pegcopy.murgatroyd.tech