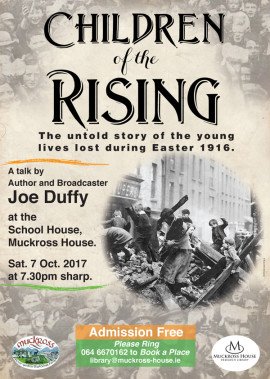 RTE’s Joe Duffy will the main attraction at a public event in Muckross House, Killarney, this October.

The broadcaster will give a special talk on the untold story of the young lives lost during Easter 1916, based on his best-selling 2015 book, Children of the Rising.

Forty children, aged 16 years and under, were among the 300 civilians killed in the 1916 crossfire.

Joe spent three years researching the lives of these children for a documentary and book.

Venue:  The Schoolhouse, Muckross House by

Joe is one of Ireland’s best-known presenters, hosting both Liveline on Radio and Liveline Callback and Spirit Level on TV. He is the author of the Children of the Rising, the untold story of the young lives lost during Easter 1916.  Released in October 2015, the book topped the Nielsen Bookscan Hardback Nonfiction chart for several weeks.

Using family sources, newspaper reports, census returns, compensation claims, and birth and death certificates the list of the dead children is a glimpse into the lives of both poor and rich, living side by side in a cramped, crowded city.  One boy, known only as ‘Male’ O’Toole, was thought to have lived hand to mouth at a workhouse for many years.

The vast majority of the children died from gunshot wounds, according to their death certificates.  One died from “cannonading”.  There were no inquests. With the exception of some notorious atrocities like the North King street massacre, and a few events where the Rebels admitted the death of civilians, it is not possible to say which side’s bullets killed most of the children.

Children of the Rising, by Joe Duffy, is published by Hachette, €19.99.

Brendan O’Carroll has called for the book to be on “the curriculum for every child in school’.