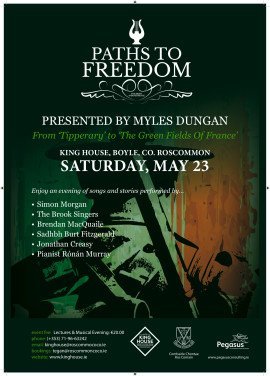 STARS of stage, TV and radio will head to King House, the restored Georgian mansion in Boyle, County Roscommon, this week, for a special two-day history event.

The event, which will take place from May 22-23, is aimed at explaining the many “shades of green” that existed in Ireland in the run-up to the Easter Rising of 1916.

Building on last year’s Great War Roadshow at King House, this year’s event continues to showcase the so-called ‘long decade’ of 1912-1923, which was a pivotal decade in our nation. As we move towards the centenary year of 1916, it’s important to explain that the Rising was part of the narrative of the emerging Ireland, not the whole story. Paths To Freedom will outline the changing nature of Irish politics, work, class and gender roles in the years leading up to independence.

The two-day event will take the form of a day of lectures in King House on May 22, followed by a muscial evening on May 23 – with broadcaster Myles Dungan the Master of Ceremonies on both days . The lectures will feature well-known expert speakers from the worlds of TV, radio and academia, while the musical evening will fill King House with songs and stories from World War 1, performed by Simon Morgan, The Brook Singers, Sadhbh Burt Fitzgerald, Jonathan Creasy, actor/tenor Brendan MacQuaile and pianist Ronan Murray.

Paths To Freedom is a Pegasus production.

If you’d like to book Paths To Freedom, orThe Great War Roadshow, for your venue, please contact us on… info@pegasusconsulting.ie