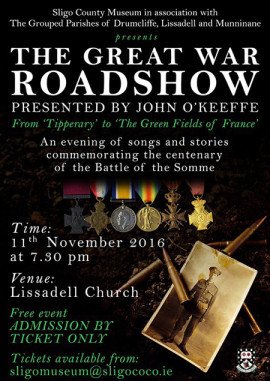 HISTORIC LISSADELL Church, County Sligo, drew crowds from all over the county for a Great War Commemorative Evening on Friday, November 11.

The Cathaoirleach of Sligo County Council, Councillor Hubert Keaney, was the guest of honour as The Great War Roadshow came to Lissadell Church.

Councillor Keaney said:  “It is fitting that in this centenary year of celebration and commemoration, that we take the time to reflect on one of the most important and tragic events in European military history, the Battle of the Somme. For many years the participation of the Irish in the Great War was largely ignored or air-brushed from our historical narrative, but this deficit has been addressed through the widely respected publications and original research by people like Myles Dungan and Kevin Myers.  Over 200,000 Irish men served in the First World War, 35,000 of whom died, many of those falling at the Battle of the Somme.  For the Irish people who survived, their trauma increased when they returned home to a society that failed to acknowledge their contribution or honour their courage. They spoke little of their experiences, nor were they encouraged to do so. The aim of the Great War Roadshow is to prompt a reflection on the ‘Great War’, to honour the many soldiers who made the ultimate sacrifice on Europe’s battle-fields, and to improve public awareness of the causes of the conflict and painful aftermath for those returning home.”

The Great War Roadshow, currently touring the country, is a Pegasus production.