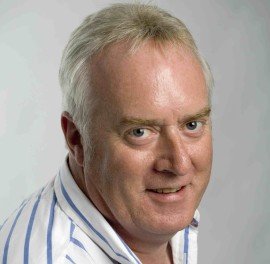 LEADING sports commentator John Kenny is to go “Down Under” to cover the upcoming Cricket World Cup.

The RTE man, known for his work on all sports across TV and radio, is to join the BBC’s commentary team for the 2015 ICC Cricket World Cup, jointly hosted by Australia and New Zealand, which will take place from 14 February to 29 March.

49 matches will be played in 14 venues with Australia staging 26 games at grounds in Adelaide, Brisbane, Canberra, Hobart, Melbourne, Perth and Sydney while New Zealand hosts 23 games in Auckland, Christchurch, Dunedin, Hamilton, Napier, Nelson and Wellington.  The final match of the tournament will take place at the Melbourne Cricket Ground. It will be one of the world’s largest international sports tournaments, with 14 competing teams – including Ireland.

India are the defending champions, having won the tournament in 2011.

John Kenny will commentate on matches for the BBC, and file reports for RTE.