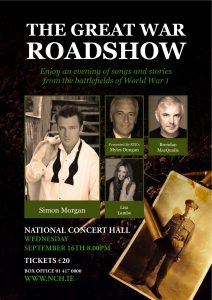 THE GREAT War Roadshow, which has thrilled audiences across Ireland in a year-long nationwide tour, is coming to the National Concert Hall.

Presented by RTE broadcaster Myles Dungan, and starring top vocalists Simon Morgan, Lisa Lambe and Brendan MacQuaile, this stirring concert showcases the music and stories of the Great War, a hundred years on.

The show will be staged in the NCH’s John Field Room on Wednesday, September 16.

Written by RTE broadcaster and historian Myles Dungan, the show has drawn standing ovations from Waterford to Cavan, Roscommon to Monaghan. In songs, stories and dramatisations, the show tells the story of the music of the Great War – how and why the best-known songs came to be composed, who sang them, what the men in the trenches thought of them, and how they retaliated with music of their own.

Vocalists Simon Morgan and Lisa Lambe provide the stardust, with actor/tenor Brendan MacQuaile playing the key role as a Dublin-born soldier in the trenches.

Lisa Lambe: A singer and actress, Lisa is best known for her work at the Abbey and the Gate, and as a member of international singing group Celtic Woman.

Brendan MacQuaile: Brendan is a classically trained baritone, author and actor, known for his one man show, March Away My Brothers.

And also some subversive and witty ripostes

The Great War Roadshow is presented by Pegasus Media and Consulting Limited.

Tickets available on this link…

PrevPreviousFIGHTING IRISH welcomed to Cavan…
Next1916 Remembered: Calling all libraries…Next