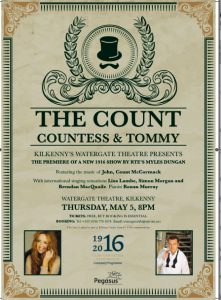 Kilkenny s Watergate Theatre will be the venue this Spring for the premiere of Myles Dungan’s new 1916 show The Count, The Countess & The Tommy.

The show, starring soloists Simon Morgan and Lisa Lambe – as seen on RTE’s Late Late Show – centres on the life and music of the celebrated Irish tenor Count John McCormack, and features some of the best-known songs of a hundred years ago.

May 5th is the date set for the first-ever performance of the show, which goes on to tour Dublin, Roscommon, Cavan, Leitrim and beyond.The show is a centrepiece of broadcaster Myles Dungan’s Paths To Freedom roadshow project, a unique package of lectures, presentations and shows remembering the Rising, one hundred years on.

The Count, The Countess & The Tommy is hosted byKilkenny County Council, as part of an extensive programme of events to commemorate Easter 1916.

The show, written specially for the 1916 commemorations by RTE historian and broadcaster Myles Dungan, is a blend of song and drama, featuring the music, not just of McCormack, but also Lena Ford, Ivor Novello, Stanley Kirkby and George M. Cohan. Produced by Pegasus Consulting, the promoters behind The Great War Roadshow and The Fighting Irish, the Watergate performance will feature headline acts, including…

The Count, The Countess & The Tommy

Tickets for this exciting occasion are free, but booking is essential.

“The Great War Roadshow offers a unique perspective on WW1 a highly entertaining evening of music and song. Not to be missed.”
– Bill Sweeney, Chairman Hay Festival Kells.

“The Great War Roadshow was a tremendous success in Cavan. Songs and music were performed by artists whose enthusiasm was infectious. The Roadshow commemorates the Great War in a fitting and enjoyable manner and is well worth going to see.”
– Tom Sullivan, Cavan County Council Library Service

RTE presenter Myles Dungan brought his entertaining and informative Great War Roadshow to the Waterford Theatre Royal and commemorated, in song and story, aspects of that war to end all wars .
– Liam Murphy, Munster Express