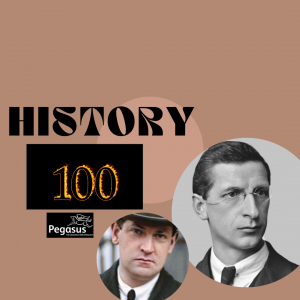 Myles Dungan’s History 100 Roadshow is on the road again this new year. Mayo & Sligo are among the stops already confirmed on the Autumn tour. There’s a talk coming to a town near you!

Ireland’s “Long Decade” – 1912-1923 – was the most turbulent and transformative time in the nation’s recent history. Partition, the 1916 Easter Rising, the War of Independence, the Irish Civil War, the 1913 Lockout all happened during those few years – and all, of course, in the shadow of World War 1. Upwards of 40,000 Irish people died as a result of the various conflicts, with many more maimed and injured, and many iconic public buildings destroyed.

From loss and destruction, however, began to emerge a new nation. Ireland’s fledgling self-government, the First Dáil, was established in 1919, the Anglo-Irish Treaty signed in 1921 and the Constitution of the Irish Free State adopted in 1922 – giving the vote to all Irish citizens over the age of 21, including women.

As Ireland’s “Decade of Centenaries” draws to a close, Pegasus Consulting is offering festivals, libraries, universities and institutions a unique package of presentations, many featuring the intersection of Irish, UK and US history.

Catch the roadshow at your local library, museum or big house… contact info@alanm79.sg-host.com

Friday, April 8 , 5pm, Myles Dungan: What did you do in the War of Independence, Grandad?

Saturday, April 9, 11am, David McCullagh: The Long Fellow versus the Big Fellow

To receive your free Zoom link for these talks, email library@muckross.ie

Liz Gillis, Children during the War of Independence – Thursday, June 24

Dr. Myles Dungan, What did you do in the War of Independence, Grandad? – Thursday, July 15

Liz Gillis, Children during the War of Independence – Friday, October 8 at 10am

Mallow Field Club, Friday, December 3 – Myles Dungan, What did you do in the War of Independence, Grandad?