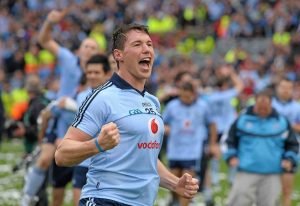 CONGRATULATIONS to our favourite GAA client – Eamon Fennell – and all the St Vincent’s team, who have successfully defended their Dublin GAA football title.

Former Dublin midfielder Fennell opened the scoring for his team, as St. Vincent’s went on to win the Dublin SFC final by 0-14 to 1-10 over St Oliver Plunkett’s.

St Vincent’s looked to be cruising to the title as they led by six points – 0-14 to 0-8 – with less than 10 minutes to go at Parnell Park. However, Oliver Plunkett’s, chasing their first ever senior football title, fashioned an improbable comeback in the dying minutes and almost caught their opponents. An Alan Brogan goal alongside points from his brother Bernard and Paraic Lee cut the gap to just one with a couple of minutes remaining, but Vincent’s hung on.