SHAHIRA stands in for Kim Kardashian! 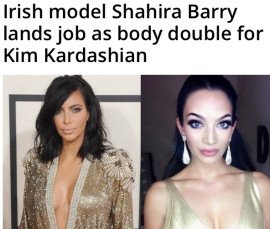 IRISH MODEL Shahira Barry is in major demand this August, after standing in for Kim Kardashian.

Shahira, one of the hottest stars on the Pegasus/TalentBase books, was booked to stand in for Kim during filming of promos for the new season of the Kardashian’s E! reality show.

The Galway girl is now in huge demand for interviews, both at home and abroad, as newspapers, radio and online press all want to hear about her experiences with the famous family.

“I was booked as Kim’s stand-in – I was very flattered and it was definitely a confidence boost,” says Shahira.  The 24-year-old added that she can’t speak too much about her time on set, due to non- disclosure agreements, but said the famous TV family were the same on screen as off.  Shahira was spotted by a production assistant during filming for a “Subway” commercial.

Shahira was a teacher before moving to Los Angeles to pursue her dream of acting and modeling. Her other successes so far include a part on HBO’s True Detective, a Subway ad and some music videos.

To book Shahira for jobs or interviews, please contact… info@pegasusconsulting.ie