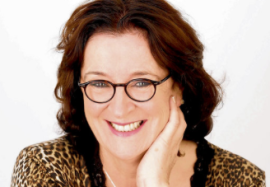 Marie Louise is a broadcaster, writer and lecturer, best known for her work with BBC and RTE.

She has lectured extensively in Ireland, Europe and the USA in education, Irish drama, Irish culture and language, and is a noted after dinner speaker.  She has also acted as Master of Ceremonies for many national and international events.

She can currently be heard regularly on The Sean O’Rourke Show, RTE.

Educated at Nottingham University, The Guild Hall London, NUI Maynooth, and UCD, Marie Louise was a member of staff at Dublin City University where she lectured in the School of Communications.

While at DCU, she was a prime mover in putting Arts to the forefront of the new campus, culminating in the opening of The Helix.

She trained in radio production, presentation and direction with the BBC in London and made and presented programmes for BBC Radio 4 for several years.

In May 20111 she was appointed to the Seanad by An Taoiseach Enda Kenny.