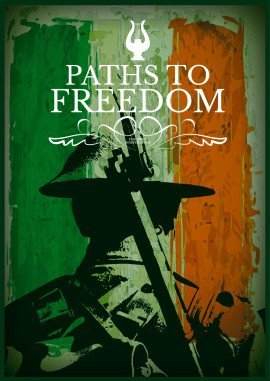 Pegasus has today announced details of its 2015 roadshow.

Paths To Freedom, the 2015 offering from the team that brought you the hugely-successful Great War Roadshow, will launch next month, with a day of lectures at the Guinness Storehouse on April 17.

The new project commemorates those generations who gave their lives on the path to freedom, both in Ireland and abroad.

As always, Pegasus will tour both a lecture series, and a musical evening.

Catch Paths To Freedom at these select venues…

Are you planning a county event, festival or open day in 2015?

Are you looking for ideas for heritage, educational, cultural or historic open days?

If so, perhaps Pegasus Consulting can help you…

“Soldiers Are We…” So begins the chorus of our national anthem, Amhrán na bhFiann.

And never was that more true than a hundred years ago, as war reached into every household in the land. For many, the war was in Flanders, or Gallipoli, as 210,000 Irishmen suffered the horrors of World War 1. For others, the war was at home, preparing for a Rising.

Fifty years before that, a previous generation of Irish warriors – up to 200,000 of them – saw action in the closing stages of the American Civil War.

In 2015, Pegasus Consulting – the company behind The Great War Roadshow – will tour a new project, Paths To Freedom, commemorating those generations who gave their lives on the path to freedom, both in Ireland and abroad.

As always, our programme will take two forms, both educational and entertaining. Pegasus will offer both a lecture series, and a complementary musical evening.

Dr. Myles Dungan: Myles presents The History Show on RTE Radio 1 and is the author of books including Irish Voices From The Great War (1995), They Shall Grow Not Old (1997) and How The Irish Won The West (2011)

Turtle Bunbury: Turtle is presenter of The Genealogy Roadshow on RTE TV and author of The Glorious Madness – Tales of the Irish and the Great War.

Dr. Ciaran Wallace: An academic and broadcaster, Ciaran is a social historian at Trinity College, Dublin.

John O’Keeffe: A teaching fellow in the School of Psychology, Trinity College, John is a criminologist, broadcaster and journalist, a regular contributor to TV and radio and a columnist for The Irish Daily Mail.

Damian Shiels: Author of The Irish in the American Civil War (2013), Damian lectures internationally on conflict archaeology and appears regularly on TV and radio. Formerly with the National Museum, he now works with Rubicon Heritage Services and runs the www.irishamericancivilwar.com website.

Gordon Power: Gordon is an expert in Military Genealogy and specialises in tracing WW1 soldiers.

‘Over There & Over Here’

2: The Glorious Madness – More Tales of the Irish and the Great War.

2: ‘The Conflict Landscape of Ireland’

1: ‘The Irish At Gallipoli’

‘The Psychology of The Fighting Irish’

The Fighting Irish: This is a musical history of the many thousands of Irishmen who fought in American armies. It stars Celtic Tenor Matthew Gilsenan, who provides the music, and RTE broadcaster Myles Dungan, who narrates the story. Appealing to all ages, it tells the story of generations of Irish immigrants who joined up to fight for “Uncle Sam”, from cowboys if the Wild West, through the Mexican-American war, to the American Civil War, where Irishmen fought on both sides.

The Great War Roadshow: Presented and produced by Myles Dungan, this stirring show tells the story of the music of the Great War – how and why the best-known songs came to be composed, who sang them, what the men in the trenches thought of them, and how they retaliated with music of their own. The songs will be performed by The Brook Singers, with soloists Sadhbh Burt Fitzgerald, Jonathan Creasy and actor/tenor Brendan MacQuaile.

Pegasus Consulting, through its subsidiary divisions – TalentBase and The Great War Roadshow – is building a substantial reputation in production and event management. We work regularly with national TV, radio and theatre companies, and organise events across the country, supplying major corporations, local councils, libraries and festivals with talent, expertise and production.

The Pavilion, Dun Laoghaire; The Waterford Royal; Draiocht, Blanchardstown; The Civic Theatre, Tallaght; The Mill, Dundrum; The Hay Festival, Kells; King House, Boyle and the Town Hall, Cavan are amongst the venues that staged our productions in 2014.

County councils in Cavan, Dublin, Dun Laoghaire, Galway, Monaghan, Meath, Roscommon, Tipperary, Waterford and Wicklow are amongst those working with us on educational and entertainment events.

If you’d like to book The Fighting Irish or The Great War Roadshow for your area in 2015, please contact… info@pegasusconsulting.ie

Praise for The Great War Roadshow…

“The Great War Roadshow offers a unique perspective on WW1… a highly entertaining evening of music and song. Not to be missed.”

“The Great War Roadshow was a tremendous success in Cavan. Songs and music were performed by artists whose enthusiasm was infectious. The Roadshow commemorates the Great War in a fitting and enjoyable manner and is well worth going to see.”

“RTE presenter Myles Dungan brought his entertaining and informative Great War Roadshow to the Waterford Theatre Royal and commemorated, in song and story, aspects of that ‘war to end all wars’. He was joined by the excellent Brook Singers… the actor/singer Brendan MacQuaile added a dramatic touch and Jonathan Creasy and Sadhbh Burt Fitzgerald brought rap and youth to the stage.”