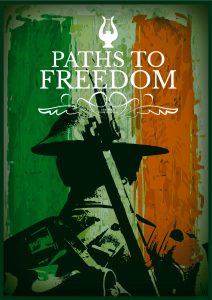 Paths To Freedom, the Pegasus history roadshow, continues its nationwide 2016 tour next month – with stops in Kilkenny and Roscommon.

RTE broadcasters Myles Dungan and Turtle Bunbury are heading the team travelling to Sligo, Dublin, Athlone, Roscommon, Cavan, Leitrim and beyond with a unique package of lectures, presentations and entertainment events to remember the 1916 Rising, 100 years on.

The roadshow opened with two events in Sligo, then moved on to Dublin and Athlone. Events in Kilkenny, Roscommon, Cavan and Leitrim will be held over the coming weeks. Further events will be announced soon.

Thursday, May 5, Watergate Theatre – Musical Show: The Count, The Countess & The Tommy

Friday, May 13 – King House, Boyle – Musical Show: The Count, The Countess & The Tommy

(Myles presents The History Show on RTE Radio 1 and is the author of multiple books, including Irish Voices From The Great War (1995), Mr. Parnell s Rottweiler: Censorship and the United Ireland Newspaper (2014) and How The Irish Won The West (2006).)

Joe Duffy: Children of the Rising

(Joe presents Liveline on RTE Radio 1 and Spirit Level on RTE TV. His new book, Children of the Rising: The untold story of the young lives lost during Easter 1916, was the highest-earning Irish book of 2015.)

Catriona Crowe: Ireland Before The Rising

(Catriona Crowe is Head of Special Projects at the National Archives of Ireland, and manager of the Irish Census Online Project. She presented the recent RTE TV programme, Life Before the Rising, and is currently working on an RTE TV documentary, Ready For The Revolution.)

Turtle Bunbury: The Personalities Of The 1916 Rising

(Turtle is presenter of The Genealogy Roadshow on RTE TV and author of Easter Dawn – The 1916 Rising and The Glorious Madness Tales of the Irish and the Great War.)

Lisa Lambe: A singer and actress, Lisa is best known for her work at the Abbey and the Gate, and as a member of international singing sensation Celtic Woman.

The show is scheduled for the Civic Theatre, Tallaght in Autumn, 2016, and will also visit King House, Boyle, in May, Cavan Town Hall in August and The Dock, Carrick-on-Shannon, in September.

The Paths To Freedom programme is produced by Pegasus Consulting, the company behind the hugely successful history projects The Fighting Irish (2010) and The Great War Roadshow (2014-15).