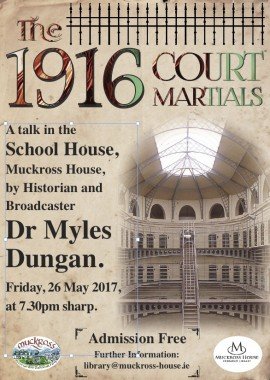 A Terrible Beauty: Ireland After The Rising

Killarney’s historic Muckross House will be the venue this May for a unique lecture series fronted by historian and broadcaster Dr. Myles Dungan.

May 26 is the date set for the next event at Muckross House, in the heart of Killarney National Park, Kerry’s premier visitor attraction. Myles Dungan will be the main draw at a special evening in The Muckross House Schoolhouse.

The lecture series is organised by Patricia O’Hare, Research and Education Officer at Muckross House Research Library, which plays a key role in documenting the traditions, life, and history of the people of Kerry.

A Terrible Beauty: Ireland After The Risingis aimed at explaining the many “shades of green” that developed in the wake of the Easter Rising, showing that the ‘long decade’, 1912-1923, was a pivotal period in our nation. Fronted by RTE presenter and historian Dr. Myles Dungan, the Terrible Beauty programme brings together a team of broadcasters, authors and key academics with important things to say about the legacy of 1916. The tour is produced by Pegasus Consulting – the company behind the hugely successful touring history projects The Fighting Irish (2010+), The Great War Roadshow (2014/15) and Paths To Freedom (2016).

The full schedule is…

Liz Gillis: What Did The Women Do Anyway?

John O’Keeffe: The Psychology of 1916

A Criminologist and Forensic Psychologist, John is Head, Colleges of Criminology & Psychology at City Colleges, Dublin. A graduate of University College Dublin and the University of Cambridge, he is Chief Executive of AdVIC, Advocates for the Victims of Homicide, Deputy Editor of The Garda Review and a regular contributor to TV and radio.

Myles is a broadcaster and historian, best-known as the presenter of The History Show on RTE Radio 1. He is the author of multiple books, including Irish Voices From The Great War (1995), Mr. Parnell’s Rottweiler: Censorship and the United Ireland Newspaper (2014) and How The Irish Won The West (2006).