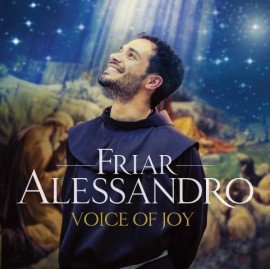 The “Singing Friar”, Friar Alessandro, drew a large and enthusiastic audience for his Irish return concert.

Friar Alessandro shot to fame in 2012 on the release of his debut album Voice of Assisi. The album went to number one in the UK Classical Charts and was nominated for Best Album of the Year Award in the Classic Brit Award 2013.

His renown has seen him perform at the Royal Albert Hall in London and record at the famous Abbey Road studios.  The 36-year-old, a dedicated Franciscan Friar, is signed to Decca Records, part of the Universal Music Group. In keeping with the vow of poverty made by Friar Alessandro, all proceeds from his singing career go straight back to the Franciscan Order’s charitable works. All profits from the Irish concerts will go directly to the Franciscan Mission in Zimbabwe.

Franciscan Brother Pat Lynch OFM, co-ordinator of Friar Alessandro’s Irish concerts, said: “We are really pleased to be able to welcome Friar Alessandro back for this Christmas concert. As well as delighting all those who saw him perform last March, his concerts raised €13,000 for the Irish Franciscan Mission in Zimbabwe. This Christmas concert is in aid of the same cause and is one that is close to the heart of Franciscans’ worldwide.”