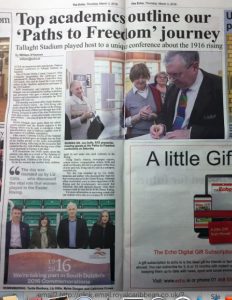 Paths To Freedom, the Pegasus history roadshow, continues its 2016 tour this Spring – drawing large crowds to Athlone in April.

Close to a hundred people turned up for the Old Athlone Society’s Paths To Freedom event in Athlone town, on Saturday, April 2 – when RTE presenters Myles Dungan and Turtle Bunbury were joined by local historians Ian Kenneally, John Burke and Gearoid O Brien, plus author Liz Gillis, for a day of lectures and presentations to remember the 1916 Rising, 100 years on, in the Sheraton Hotel.

The roadshow will also visit Kilkenny and Roscommon in April and May.

The roadshow opened with three sold-out events in Sligo and Dublin in February, and now moves on to Athlone, Kilkenny, Boyle, Cavan and Leitrim. Further events will be announced soon.

11.15 Liz Gillis: What Did The Women Do Anyway Women and the Rising

12.00 Ian Kenneally: We Kill All Our Own: Media, Propaganda, and the Rising

11am Catriona Crowe Ireland Before The Rising

12pm John O Keeffe The Psychology of The 1916 Leaders

Lisa Lambe: Lisa, an Irish singer and actress, has been described by The Irish Times critic Fintan O’Toole as “the finest singer and actress of her generation”. Lisa is best known for her work in Irish theatre and is internationally renowned as a singer.


Simon Morgan: A world-renowned performer, Simon has performed many operatic, and concert roles in venues across Europe, the Americas, and Asia. The country’s most adaptable baritone and internationally loved.

The show is scheduled for the Civic Theatre, Tallaght in Autumn, 2016, and will also visit The Watergate Theatre, Kilkenny and King House, Boyle, in May, Cavan Town Hall in August and The Dock, Carrick-on-Shannon, in September.

The Paths To Freedom programme is produced byPegasus Consulting, the company behind the hugely successful history projects The Fighting Irish (2010) and The Great War Roadshow (2014-15).